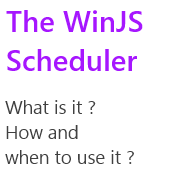 Windows 8.1 comes with a new feature in the WinJS SDK : a scheduler. Let’s see what it is and how to use it!

In Windows 8, every job is nearly done as soon as you execute it. You could play with the msSetImmediate function but it was still a little mode “hack” than “code”.

With Windows 8.1, the SDK introduce a scheduler used by the whole WinJS framework. This scheduler helps you to define what is important (animations, visual feedback, manage user input) from what can be delayed (background work, data processing not used immediatly).

The goal is to let you build application which reacts immedialty to the user will.

There is 4 importants objects to know :

Launching a job is as simple as providing a function :
[js]
var job = WinJS.Utilities.Scheduler.schedule(function willBeExecuted(){

The returned object is a IJob object and you can call some function on it to cancel it’s scheduling, pause it, resume it and have some information like the name, the priority, the owner, etc.
[js]
//create a job
var job = WinJS.Utilities.Scheduler.schedule( /* …*/);
//pause the job
job.pause();

In this case “yielding” means “let other task more important than me start and do their job while I am executing and pause me”.
Let’s assume that you have a job which takes 10 seconds to be done and that you can split it in 10 parts.
Then you can launch the job with the scheduler, do the first part and tells it : do something else (other jobs with higher priority) if necessary then call me back. The Scheduler will then manage this process for you.

When your job is executed, a parameter is actually provided and it implements the IJobInfo interface. This jobInfo object has 2 important functions and 1 important field :

So how do we implement this feature ? By creating a processing function which will process each part in a loop. At each cycle, we will check if we have to yield. If so, we tells the scheduler to call us back when it wants to restart our process. If the process is done (10 parts processed) then we just returns.

Here is how I will implement this “10 parts processing”.
[js]var partProcessed = 0;

//check if I have to yield :new job with higher priority
// may have been scheduled
if (jobInfo.shouldYield) {

//we yield so we exit the ‘process loop’
break;

The IOwnerToken interface and how to use it

IOwnerToken is an interface which represents the owner of a job. By owner it means “master” : the one who controls and manage it.
A token can be set to multiple jobs at once and there is one function on this interface : cancelAll. This function simply cancel all the jobs owned by the token.

//Cancel the jobs at once :
ownerToken.cancelAll();
[/js]

This token is then really useful when you want to manage a group of jobs at once. Create an owner, if the user do something else, goes to another page : you cancel all the task at once and retrieve some CPU juice.

Now let’s discover some useful functions when playing with jobs and the scheduler.