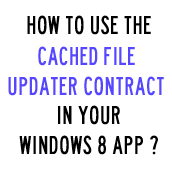 As you can read on MSDN, there is in fact a lot of contracts available for a Windows 8 app.

Today, I want to describe one which is very useful for the Dropbox client I work on (8 Files In A Box) : The Cached File Updater contract.

As you will see, it can be really useful with the FileSavePicker contract.

First of all :
The code of this blog post is available here.

The Cached File Updater contracts simply declare that your app is responsible for the management of one or many of its files. This is really useful for ‘file management apps’.

You can usethe “CachedFileUpdater” to do some really interesting things :

I refer to “a file” but this can be done on any file of your app.

Using this contract is done in 4 steps, one being optional.

1)Declare the contract in the manifest.

The first thing, as for any contracts is to declare the contract in the app manifest. Simply add it : 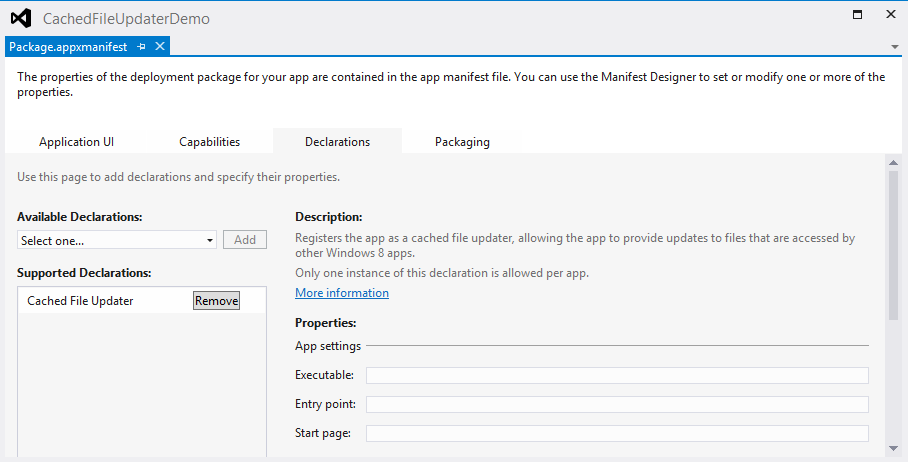 2)Define some triggers on your file.

When you create a file in your app, you can define some triggers on it using the CachedFileUpdater.SetUpdateInformation method. This is a simple call and it takes 5 arguments :

Here is an example which ask your app to be activated after an another app writes on your file :
[csharp]CachedFileUpdater.SetUpdateInformation(fileCreated,
"A content id to identify the file.",
ReadActivationMode.NotNeeded,
WriteActivationMode.AfterWrite,
CachedFileOptions.None);
[/csharp]

3)Override the OnCachedFileUpdaterActivated method of the Application.

Once this is done, you can override the OnCachedFileUpdaterActivated method of your application. The provided arg will give you a propertie “CachedFileUpdaterUI” with some interesting information :

When you don’t have to show any UI to the user, you’ll simply have to grab the file when the FileUpdateRequested event is raised and do something with the file. If the local file have to be updated, you can call the UpdateLocalFile method and provide an up to date file.

//do not forget this
Window.Current.Activate();
}

//Do something to the file

//If the local file have to be updated, call do this :
//StorageFile upToDateFile=null;
//fill upToDateFile with the correct data
//args.Request.UpdateLocalFile(upToDateFile);

4) Ask the user for some input (optional).

If the update process needs it, you can ask the user for some input.

//Can set a custom title
sender.Title = "Requiring input for : " + args.Request.ContentId;

//Can set a custom title for the UI
sender.Title = "Requiring input for : "
+ args.Request.ContentId;
deferral.Complete();
return;
}

Why is it useful with the FileSavePicker ?

In 8 Files In A Box, the Dropbox client for Windows 8, we wanted to be able to save a file and to upload it directly to the user Dropbox.

I first thought it was not possible : as soon as the file save picker provide a file to the requesting app, my app is shut down by Windows 8 and I have :

Leonard one of my Infinite Square colleague demonstrated me that I was wrong (and that impossible is really not a French word:)).

It can in fact be done using the Cached File Updater contract :

Others importants things to know

1) don’t forget to activate your app.

After some research on the internet, I finally found that the Windows.Current.Activate() call to activate your app is really necessary : do not forget it 🙂 !

Finally, I just want to remind you that the app requesting the file is responsible to let Windows know that it has no more use of the file (the write is done). So if your app is not activated, it could be because the requesting app is simply not asking you to update the file.

If you are using (not implementing but using) the FileSavePicker, please calls the CachedFileManager methods like in this snippet from the file picker sample :
[csharp]
// Prevent updates to the remote version of the file until we
// finish making changes and call CompleteUpdatesAsync.
CachedFileManager.DeferUpdates(file);
// write to file
await FileIO.WriteTextAsync(file, file.Name);
// Let Windows know that we’re finished changing the file so the other
// app can update the remote version of the file.
// Completing updates may require Windows to ask for user input.
FileUpdateStatus status = await CachedFileManager.CompleteUpdatesAsync(file);
[/csharp]

3) be careful with the Dispatcher

When your app is activated, a Dispatcher is created for it. The CachedFileUpdaterUI use another Dispatcher and you have to be careful to be on the right dispatcher(yours) when updating your UI. For example when you set the content of your Windows, don’t forget to do it on your Dispatcher.

I let you digg into my attached code for a more complete example.
If you want another sample, you can download and use the File Picker sample on MSDN.

That’s all for today !