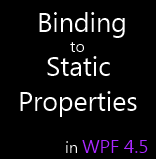 There is two different ways to make a property bindable: implementing INotifyPropertyChanged is the most known solution, the other one is to create a event named PropertyNameChanged.

In WPF 4.0 there is no way to create a static property which can be used by a binding with property change notifications.

In this post, part of a serie on the WPF 4.5 new features, we’ll see how it can now be done!

As pointed out in the documentation page, there is, as for instance properties, two solution to achieve that:

It does not work with the x:Static extension 🙁

I first think that this will be an easy demo to build: I just have to use the x:Static extension as a source in a Binding and tada this is over! But life isn’t easy: it does not works.

On the contrary, I had to put an instance object on which my static property is defined in the resource and use it as the source of the Binding.
In the demo project, I have created an object named Repository which defines a static property named “Color”. I will use it to define a brush on a Rectangle so changes will be easy to watch.

//Color property is here, let’s see later how to define it…
}
[/csharp]

UPDATED: why the static extension does not work ?

Sam Bent from the WPF team explained me via emails why the static markup extension cannot be used for this scenario. Here is a quote of his mail:

In general, most ways of assigning a value to the property don’t do change propagation. If you want something dynamic, you have to ask for it. There’s only two ways to do that:
<TextBlock Text=”{DynamicResource D}”/>: reacts to changes to the resource dictionary where D is defined
<TextBlock Text=”{Binding Path=E}”/>: reacts to changes to the source property E

Besides the pay-for-play argument, there are two more reasons why {x:Static} doesn’t do change propagation:
1. Compatability: It didn’t in 4.0.
2.Functionality: Some (most?) people still want the 4.0 behavior, with no change propagation, if only because it’s cheaper. We’d need a way to get that, {x:StaticWithNoChangePropagation} or the like.

The bracker are mandatory for it to work and the XAML processor complains something about attached properties which does not exists: just ignore it.

As this is a static property, there is no instance so null is provided as a sender in the argument.

This solution is nice when you have only one property but can be fastidious when you have a lot of them because there is one event to define/raise for each property. This is why the second solution is often prefered.

The generic event is what you are used to with normal property.
The declaration of the event is usual. When you raise the event, you have to provide the name of the changed property to the event argument.

Here too, as there is no instance, null is provided as a sender in the argument.
[csharp]private static Color _color;
public static Color Color
{
get { return _color; }
set
{
if (_color == value) return;
_color = value;
RaiseStaticPropertyChanged("Color");
}
}

This solution differs just a little from the non-static one : you can’t use string.empty as a property name to signal a change of every static properties values. If you do so you’ll, at the time I write this post, get an InvalidCastException: “Unable to cast object of type ‘PropertyRecord’ to type ‘ListenerList'”.

The demo – which can be found on my Dropbox folder after registration if you want to give me space 🙂 – works fine and the rectangle color is updated on each button’s click. But when I tried to add a TextBlock binded to the same property under the rectangle, I noticed that the rectangle color was nor more updated.

After some investigation, I found out that it seems that only the first binding in the XAML seems to be working. The other are no more updated…

Did I missed something ? If yes, please tell it in the comments !

Update: Sam told me that it will be fixed in the vNext.