In my previous post on Coded UI tests, we have seen how to make a control discoverable by a Microsoft UI Automation client including the Coded UI tests builder.

As stated in the previous post, an application exposes AutomationPeer. They are then found by UI Automation Client as AutomationElement objects. These items are identified uniquely by the AutomationId property.

This identifier is not mandatory but it’s a best practice to set it when you plan to perform UI tests.

The automation id is a property which helps you to find a specific UI element among others. This is, for example, very useful when you want to find a specific item in a collection (listbox, menus, etc.). Another benefit is that, as the control is uniquely identified, you can move it elsewhere or change its name and it will still be found by a previous code needing it.

To leverage the power of it, there is a rule to respect: it’s expected to be the same in any instance of the same application and ‘unique by instance in its scope‘.

This is a rule and you are not forced by the runtime or anything to follow it. As a proof, AutomationPeer returns a default value of string.empty which is really not unique!

By the way, if you want to set a name to a control(for example to improve accesibility) uses the Name property instead of the AutomationId one.

How to use it in automation clients ?

This is pretty straightforward, you just have to define a condition on it, providing the searched value:
[csharp]string seekedAutomationId = "AnUniqueValue";

How is it used by the Coded UI tests builder ?

This tool is the one shipped with Visual Studio with which you can record coded UI tests.

How to find it on existing application ?

Snoop for a WPF application, UI Spy for a Silverlight one !

As this is a standard property you can read it as any other with these tools! In using it, don’t forget that it’s not an inherited property and that you have to select precisely the control (It can be difficult using the Ctrl+Shift shortcut). 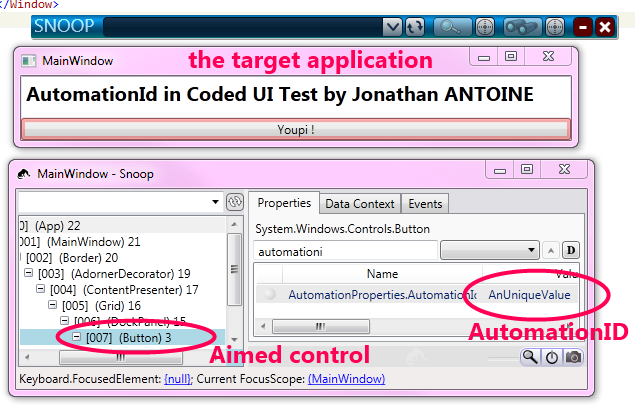 When to set the AutomationId ?

As you’ve read, this is not mandatory to set it but it is a best practice.

My opinion is to do it right when you code in any application which may be tested trough coded UI tests.

To set it on all control is useless because not all control will be tested. Instead, I recommend to identify the key controls of the application. Usually, it’s button, menu items, any controls which can receive input from the users (keyboard and/or mouse).
Also, don’t forget the controls which evolve on user interaction and display results / information.

It can be a good thing, before to start to write any code, to set up a meeting with the quality team, deciding what are those controls. The member of the quality team usually know what they test 🙂

In any user interface, there is dynamic parts. One of the most common are ItemsControls. A recurrent question is “how can I define an AutomationId on something which is dynamic ?“.

My answer is : “as you would do for any other problem – via a binding“. The AutomationId is an attached dependency property and you can set a binding on it which will solve your problem.

The real issue is to respect the previously mentioned rule: “how to keep the id unique and the same in all the instance of the application”. The solution will depends of the application and the goal of the control.

If the aimed control is targeted because of the value it represents (a specific person) then you can generate the id using the model property (the id of the person).

If the aimed control is targeted because of its position in the interface (the 5th item in the list) then you can bind to UI-related properties like the alternation count for example. You can also find a technique which uses the index of the item in the list as an AutomationId.

More to read on the subject

If you want to discover more on this subject, here is some interesting links: